SO WHAT HAPPENS NOW?

Since completing THE FEEDERS, many people have asked me if Paige's story is over and done with. What's my response? Yes it is. For now. But I'm not ruling out another episode in Paige's long, long life. Especially since there are a few loose ends left. But I don't want to mention that here in case you're reading this and you haven't finished THE FEEDERS.
I'd love to see this trilogy made into a movie! Any ideas who might play the main parts? I'd love to hear from you. And now you can contact me through my beautiful new website. Check out the CONTACT page right here. Let me know who'd make a great Paige, or Chale or Junius? 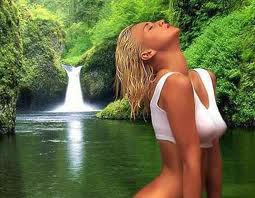 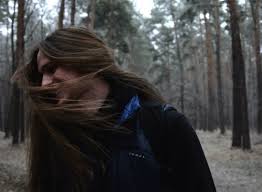 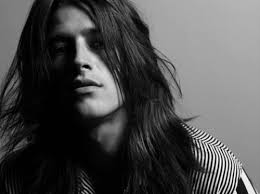 Oh and before I forget, if you've enjoyed any of my books, PLEASE, PLEASE, PLEASE write a review on Amazon and Goodreads. I know that if you read the books on Kindle Amazon asks you for a star rating at the end. That ISN'T a review. You need to actually write a review. Even a one-line review will do. They're so important to us indie authors. 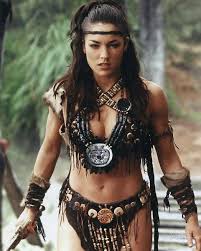 Right now I'm working on a new YA book. The working title is THE MOONBOW. Here's the blurb!

To draw the bow, to hurl the javelin, to bestride the horse, these are our arts.


Of womanly employments we know nothing
2055: Myrine lives on an island in the Pacific ruled by women who, tired of the warring ways of men, left the mainland and,  follow the Amazon warrior tradition. Reproduction is carried out in a yearly “coupling” trip to a neighboring island. Male children are taken away by the ruling grandmothers. Where do they go? Nobody knows.
When Myrine discovers Tom washed up on the beach, his father killed by sharks, she takes pity on him and hides him, bringing food to keep him going and learning more about the world on the mainland. As she gets to know him she realizes that all she’s been told about the evil of all men isn't true, since Tom is a healer.
Myrine is training for her coming of age ceremony when she’ll be presented with a ceremonial bow denoting her full warrior status. Because of her prowess, she earns The Moonbow, the most prestigious honor for a young warrior, which means she will join the leader’s personal guard.
But when her sister gives birth to a boy and Myrine witnesses the baby being cruelly taken away by the guards. She follows them into the forest and finds a secret place where male babies are kept until they’re sent away to an unknown destination.
When her sister confides in Myrine that all is not right and their leader may be corrupt, Myrine risks her life and  joins with Tom, to travel to the dangerous mainland and find out what's going on. 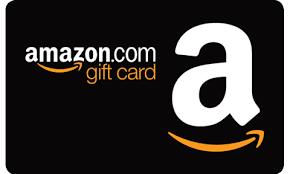 EXCITING NEWS!
I'm offering a $20 Amazon gift card to the first person who either sends me a message via my website, OR recruits another member to my mailing list. Writing a review would also be great!!
HAPPY READING!!
Posted by Marjorie DeLuca at 09:12 No comments:

THE FINAL CHAPTER IS HERE!! 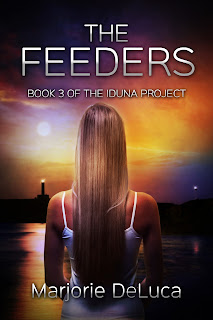 I'm so happy to announce that the final instalment of The Iduna Project is available now on Amazon.com and all other Amazon stores.
It's been two years since I started this journey with Paige, Chale, Junius and all the other characters who've slipped in and out of the action. Some have returned and - sad to say - others didn't for various reasons.
I originally came up with the idea after reading an article about some research studies on the prevention of ageing. I realized then that there were no Young Adult books dealing with this topic and yet it's our young people today who may see this research pushed to the forefront of scientific discovery.
What did I learn from writing these books? Well - I learned that living forever might be a much more complex idea than we realize. First, the unrest resulting from a discovery of this type would be almost catastrophic as corporations, government and even criminal organizations fight to control it. Second, the reality of living forever has its advantages and drawbacks as Paige soon discovers. It would take a great deal of mental strength to keep going.
I guess I can say the main thing I learned is this - as Emily Dickinson so eloquently says:Unable are the loved to die, for love is immortality. 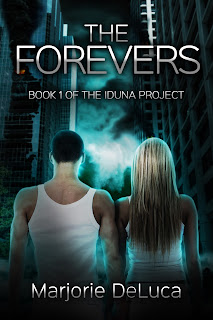 As human beings, our need for love and freedom and belonging outweighs anything else in our lives and as Lynette, Paige's beloved mother surrogate tells Paige: “Your love for me is my immortality, Paige. That’s how I’ll live forever. The rest is just vanity.”
So, does Paige find her freedom? Does she meet her father? Does she find happiness with someone? And who is that someone?
I guess you'll have to read THE FEEDERS to find out!!
The paperback version will be out in a couple of weeks!! There are two versions of the cover. Check out one below (just ignore the Shutterstock logo for now!) 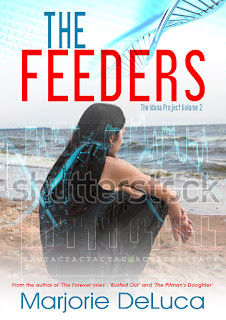 Posted by Marjorie DeLuca at 10:15 No comments:

Every now and again I love to change my covers. It's never irreversible, but sometimes it just reignites interest in the books. Since I'm close to finishing Book 3 of the trilogy, I had a whole new series of covers for The Iduna Project designed by Ida at Amygdala Design. I'm previewing them here and I'm looking for your feedback about them.
What do you think of these bold new designs? Let me know. Give me your thoughts and you could be the recipient of a complimentary copy of The Feeders when it finally comes out! You'll have to email me at marjoriedeluca1@gmail.com because the comments command at the end of the blog post hasn't been working. (Note to self: Must check this out and fix it!). Please let me know. Don't hold back! 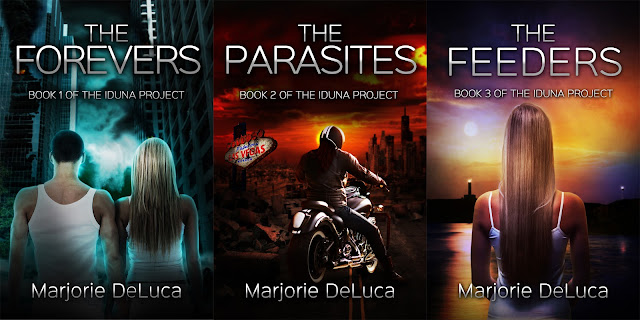 Posted by Marjorie DeLuca at 08:44 No comments:

I'm so excited to reveal the new cover of THE FEEDERS, the final book of THE IDUNA PROJECT. Designed by the wonderful Jeanine Henning, it completes the beautiful trio of covers. Here's a quick preview of the cover blurb: 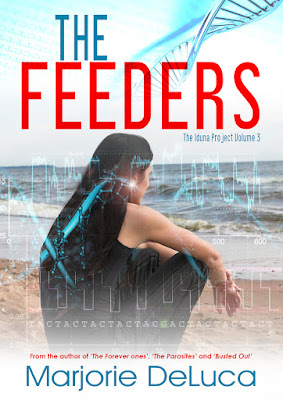 Paige has survived the Battle of Sin City, even though Antoine is injured and Yul holds Junius hostage at Iduna Central. She returns to Carter City with Chale, determined to find her father on Masalina Island, a place that could provide permanent sanctuary for the Forevers.
But Marcia has other ideas and when Junius’s father shows up unexpectedly, plans for the next mission to save Junius go into high gear. Meanwhile a shocking discovery among the ARP residents of Golden Heights threatens Yul’s entire empire making him desperate to get to Paige and her father who may hold the key to the success of The Iduna Project.
Paige must find the courage to outwit Marcia and Yul otherwise she’ll always be a pawn in the race for immortality. But she faces a tough road and unexpected dangers and revelations in her search to uncover the truth about all the players involved in the Iduna Project.


Can Paige finally find freedom and happiness? And who will she find happiness with?
Find out in the gripping final episode of The Iduna Project.

I'm working hard to get the book finished, but it will soon be available for pre-order on Amazon. And I do hope the final book will tie up this story that has been such a joy to write!
I'll keep you posted on its progress!
Posted by Marjorie DeLuca at 19:05 No comments: 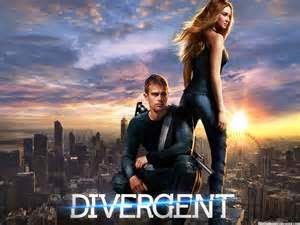 I'm not always a huge fan of book to movie adaptations, and I wasn't a huge fan of Veronica Roth's novel Divergent, but I'm going to take another look at it now I've seen the movie. Directed by Neil Burger and starring Shailene Woodley, Theo James and Kate Winslet, this is a tense, deep and beautifully adapted movie.
Roth's idea of a society divided according to dominant personality characteristics is a brilliant and original one, though it reminded me a little of the class system in Aldous Huxley's classic, Brave New World.
The movie's setting is the grim and crumbling urban landscape of Chicago, where the population is kept in check by making sure everyone fits into their chosen roles. There's no room for individuality or multi-faceted personalities in this society. You blindly follow your chosen course because the leaders know best, although there's a power struggle going on between the leaders with brains and the the leaders with a conscience. Sounds like business as usual, 2014!! 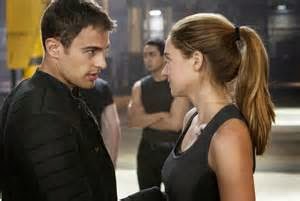 Shailene Woodley plays Triss, a courageous, gutsy girl who suspects she's Divergent, meaning she doesn't fit neatly into one category. This puts her in danger because the leaders don't want people with well rounded personalities who can't be controlled. She manages to pass herself off as Dauntless, which starts off all the action in the story and leads to her discovery of a sinister plot that she must overthrow.
Shailene Woodley is a perfect Triss. Strong, cool, brave, conflicted and caring. Theo James as Four is handsome, mysterious and absolutely magic on screen. This is a movie with a little more thought and depth than The Hunger Games and I was glued to the screen the whole time, invested in the compelling characters.
I'm definitely going to check out the book again!! 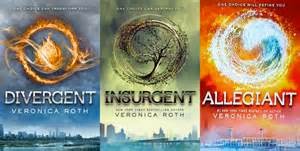 THE FOREVER ONES NEWS!! The book hit #1 on 2 Amazon bestseller lists and went up to #72 in the entire Kindle store for free downloads. Paige is definitely on the move!
THE PARASITES has received some great reviews and is on Kindle Countdown this week.
Posted by Marjorie DeLuca at 09:45 No comments:

THE PARASITES! Live in the Kindle Store 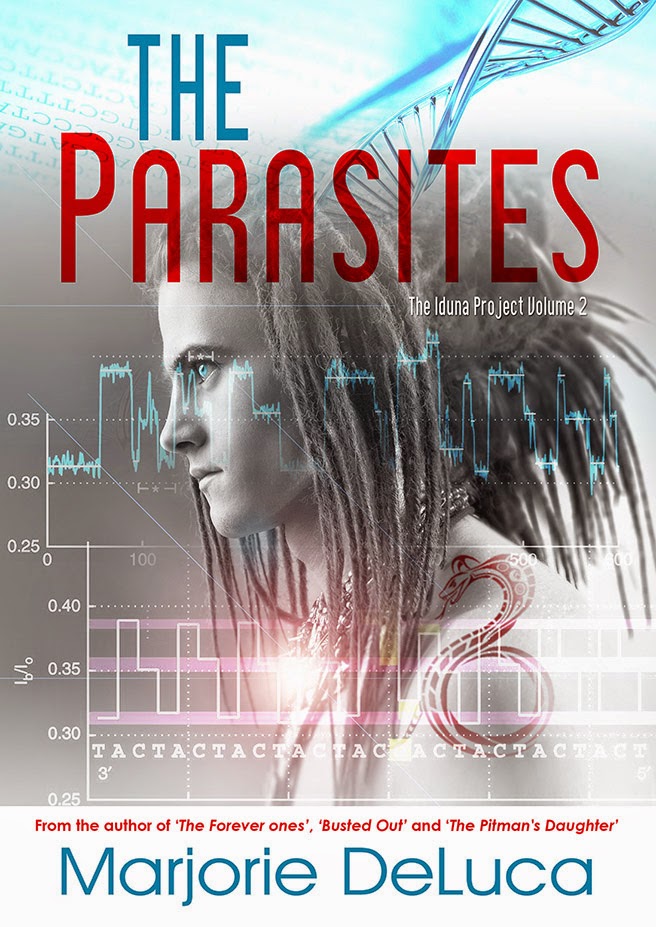 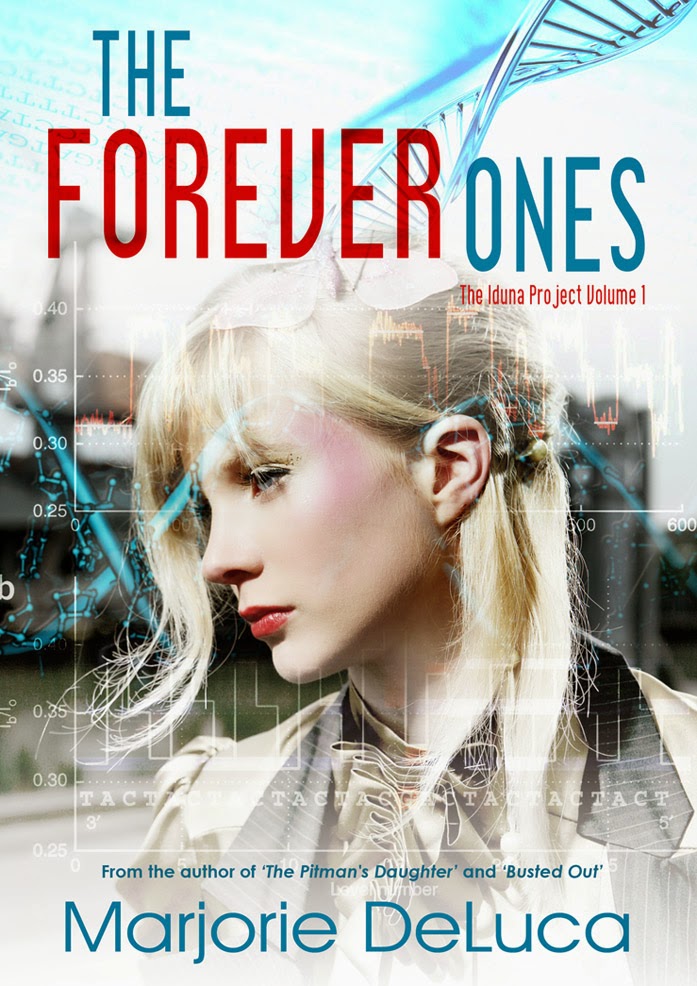 LIVE IN THE KINDLE STORE!! THE PARASITES, Part 2 of The Iduna Project.
Follow the continuing story of Paige, Junius and Chale as they fight Big Business and Big Crime in an effort to stop the exploitation of the Forever Ones.
The paperback version will be out next week!
Posted by Marjorie DeLuca at 12:54 No comments: 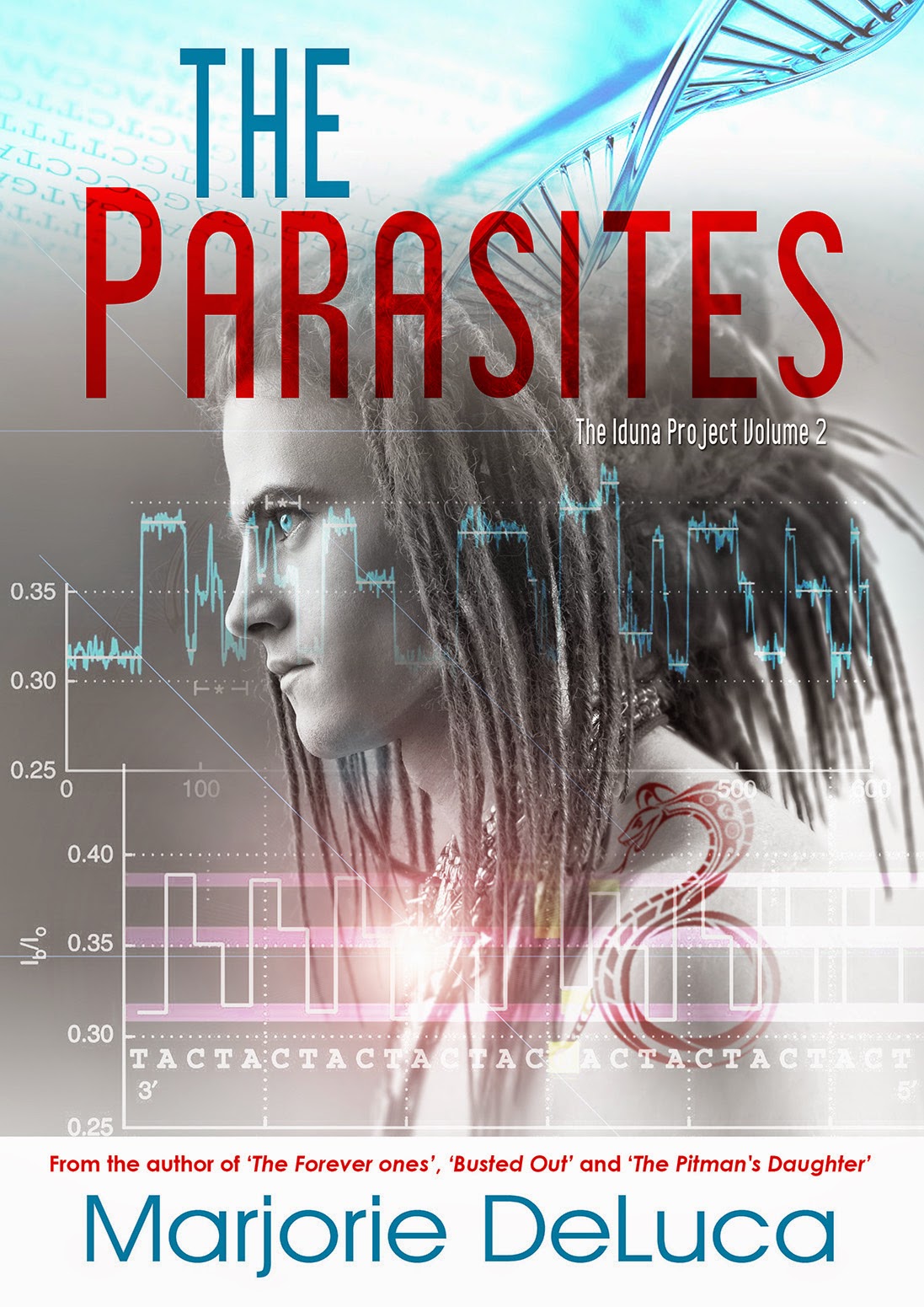 Once they’re inside you, there’s only one way to stop them


I'm delighted to finally reveal the cover for BOOK 2 of the Iduna Project series. The book is now going through final edits and will be available in the middle of June. I'd hoped to get it out earlier, but was sidetracked by work on my adult historical fiction novel, UNNATURAL.
It's always fun to rejoin Paige, Junius and Chale as they continue in their quest to make sense of the strange and dangerous world they've discovered after escaping from the Iduna compound, and this book takes them deep into the desert to Sin City and the bizarre world of the Crime Lords.
My travels to Arizona and Las Vegas really inspired the setting for this novel, as well as  a Vanity Fair article entitled Three Planetary Futures, which imagines the future Las Vegas as a strange and arid eco-tourist destination where once-opulent hotels crumble into the dust and colonies of kangaroo rats inhabit ruined Bellagio suites. All because the water supply was redirected to larger population centres. Check this fascinating article out here.
This beautiful cover was designed once again by the wonderful Jeanine Henning. Check out her work here and I'll keep you updated on release dates as well as feature some background info and excerpts in coming blogs.

Posted by Marjorie DeLuca at 09:19 No comments: 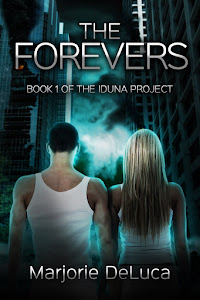 PART 1 of THE IDUNA PROJECT 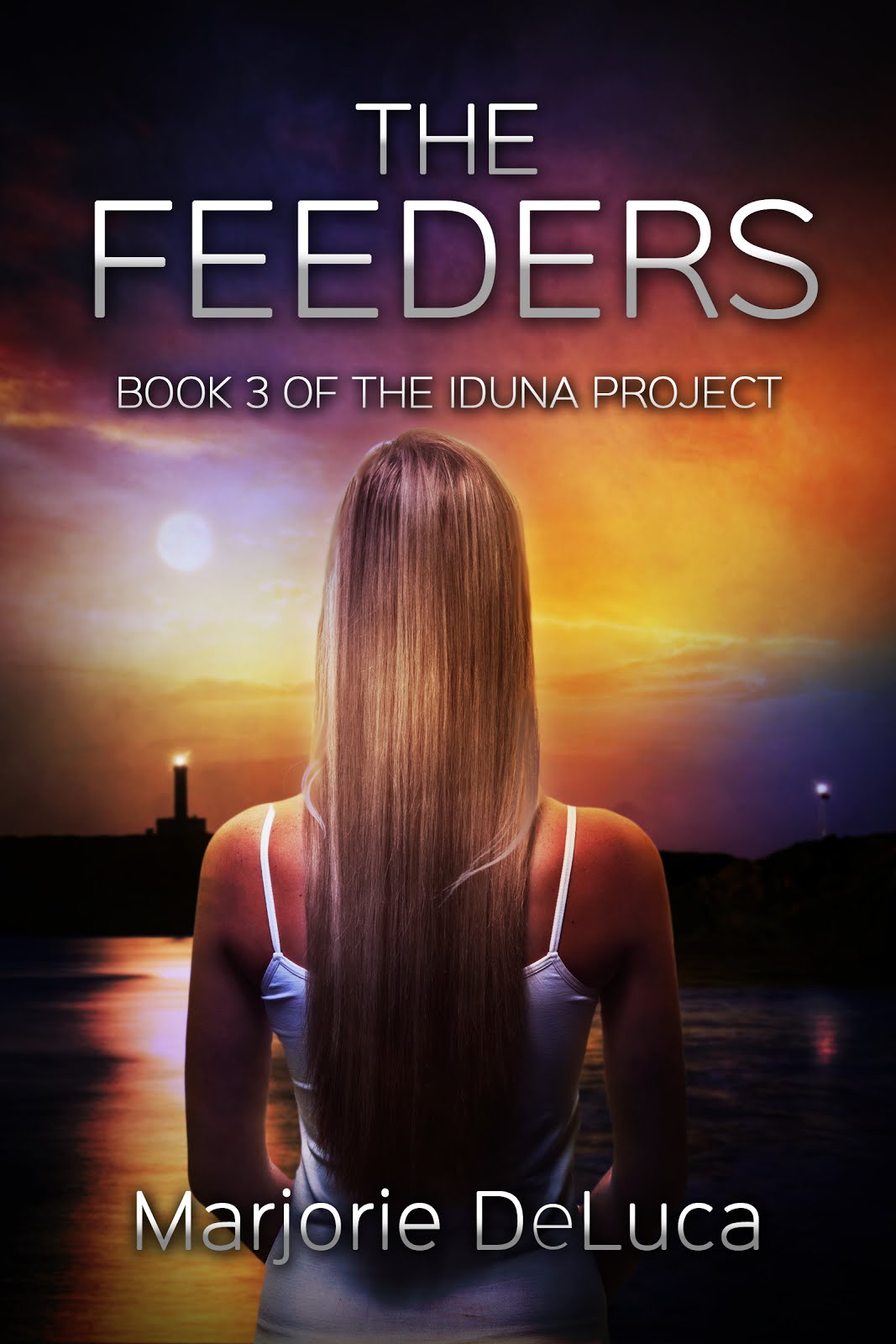 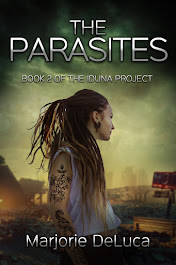 PART 2 of THE IDUNA PROJECT